Drums are awesome instruments. I mean, you hit stuff with wooden rods and dope sound comes out. It’s the pinnacle of human engineering.

They are, however, quite noisy, which makes them unsuitable for urban living spaces that cram more people per square-meter than Bangladesh. Luckily, electronic drumkits are a thing, and even more luckily, they don’t sound terrible anymore. Just plug your earphones, and presto, silent druming. Except… If you live in an apartment (as I do), the constant hitting of pads and pedals propagates vibrations through the floor, that will certainly be heard/felt by your donwstairs and nextdoor neighbors.

The standard solution for this issue seems to be mounting the entire drumkit onto an MDF platform, and placing it on some insulating material: tennis balls are a common alternative, but some people go all in and use sylomer (an industrial-grade dampening polymer) instead. I wanted to save some money and avoid the hassle of getting a slab of MDF into my otherwise not-so-big-apartment (in particular, because the corona-induced lockdown makes it harder to get one cut to size), so I decided to try a 3D-printing route instead.

I own a Roland TD-1DMK kit with a double bass pedal, so I started off by taking all measurements of both the bass and hihat pedals, the diameter of drums feet poles/tubes, and checking up on the nominal sizes for tennis balls. Threw everything into Fusion 360, and voilà. Below is the assembly for the left bass pedal and hihat  – use the “Explode Model” option in the viewer to see the individual parts:

After some ~24 hours of 3D-printing, the end-result turned out nicely:

On the left, the assembly for the bass drum;  center, the hihat – it is connected to the left bass drum, or it’d tip over. On the right, the cups that replaced the drum kit’s original rubber feet. To actually measure the effectivity of the setup, I used a seismometer app on a phone placed ~50cm from the center of the drumkit, directly on the floor. You can see the results below:

As you see, for the tom/snare hits, the attenuation is very effective: you can barely see the vibrations in the scope. The pedals – by far, the biggest culprits – also get a suprising amount of attenuation: 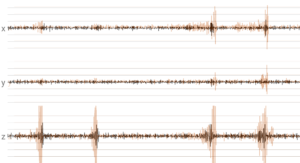 This is the snapshot of both the bass- and hihat-pedal hits. In black, the dampened version, superimposed on the original signal in orange. You’ll notice that the original transients even clipped. From the image, one sees roughly a 1.5:4.5 ratio between the after/before peaks (on Z), which would boil down to a ~70% worst-case improvement. I’ll admit, this is very unscientific, but I didn’t have access to the raw data of the sensors. In any case, I’m actually quite satisfied with the result. Let’s hope the neighbors are too.